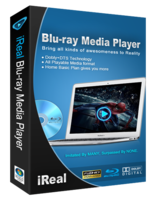 Blu-ray Media Player from iReal intends to do more and go further, in every way. It is a powerful and wonderful media player, with extraordinary tech-base for greater functions. iReal gives you the utilities and style of a media player, and also challenge itself to achieve every possibility. Built with innovative, cutting-edge technologies like DTS-HD®, and with a few focus on design, this Blu-ray Media Player could be a choice that brings you a lifetime enjoyment.

It doesn’t seem possible. That a media player with so much --- Blu-ray, DVD, and them in ISO format, all types of HD video formats, and mainstream audio formats also --- could be real. But it is. In fact, iReal Blu-ray Media Player strives to be this make-it-all-happen wonder-maker. And greatness does lie in the capacity of this Blu-ray Player software, not only for its all-in-one feature but also for its attention in perfect detail. It conquers.

No bluffing. No big words. The perfectionism of iReal Blu-ray Media Player translates its professionalism, which makes iReal the peer leader of its fellow media player softwares, into doing its job particularly well. And yet, it goes far beyond. You could just derive satisfaction and joy from what iReal Blu-ray Media Player offers. All those home-theatre fantasy, maximum HD experience, high-fidelity-sound preference are all true that you could have them all from iReal Blu-ray Player.

Compatibility for All and All. Almighty.

Being compatible with just one device is easy. But all of them could be difficult. iReal Blu-ray Media Player, however, manages to achieve full-compatibility with all Mac OS X and Windows OS, moreover all models of Mac devices and Windows-based desktops, laptops, tables and convertibles. This takes a Blu-ray Player to be versatile and powerful so that it could fit in just about everywhere. No matter what your preference is for now or future to come, iReal Blu-ray Media Player would be right here, waiting for you.

You know exactly what to do and how to do it from the first time you launch iReal Blu-ray Media Player. The revolutionary interface in this Blu-ray Player Software is very much so designed for your convenience. No instructions, no long and long articles to help, everything you want to see and want to do is in exactly where your intuition leads you to. Clean and simple, that’s what iReal Blu-ray Player is. It takes one click to open and another to play, pause and share. You will find iReal Blu-ray Media Player is made, just for you.